Taking in the arts 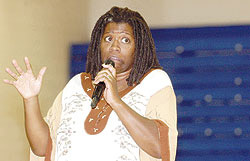 CONCORD – Seventh graders at C.C. Griffin Middle School showed their excitement to be out of class Monday morning by stomping the beat of Queen’s “We Will Rock You” on the gym bleachers as storyteller Donna Washington awaited her turn with the microphone at midcourt.

There were no elaborate sets or choreography – just Washington and her words.

How did she ever stand a chance against this throng of preteens?

The storyteller held her own, mixing grand gestures with an inflective voice to tell students about the time she got her siblings in trouble for spilling sugar all over the stove while making Kool-Aid.

“A lot of times, (children) don’t think they have anything in common with us,” Washington said.

So, she continually asked her audience questions, just before unraveling key parts of the story.

“How many of you have brothers or sisters?”

“How many of you occasionally did something and tried to blame it on the dog or cat?”

The questions prompted raised hands, collective chatter and interest in the next detail.

“She could read the ingredients off a box and they would be following every word,” said Edie Barnhardt, a Cabarrus Arts Council board member.

Washington will stay in Cabarrus for the rest of the week, performing at other middle schools. The appearances are made possible by the Cabarrus Arts Council’s Students Take pART in the ARTS, a program that brings a professional arts performance to each grade throughout Cabarrus County.

James Williams, C.C. Griffin Middle principal, said the success of such performances can be measured by students’ reactions, and Washington received high marks.

“Some of these kids may never see a storyteller of her caliber,” Williams said.

Washington has been a professional storyteller for 18 years, branching out to writing books and recording CDs.

At C.C. Griffin Middle School, she recalled her parents’ reaction to the mess she left on the stove.

Though her father threatened to spank all eight children if no one confessed to the mess, Washington kept quiet despite feeling guilty for being the culprit.

The first to receive a spanking was her trouble-prone sibling, Milton. An older brother then took the blame for the incident, sparing the remaining six siblings from the spankings.

Years passed, but every time the family reunited someone retold the story.

Washington finally confessed to her family 12 years after the “great sugar incident.”

“Every single one of them glaaaared at me,” Washington said emphatically. “After 12 years, everybody was still maaaaad!”

“He tells my new husband, ‘Watch her. She can lie with a straight face,’ ” Washington told students. “And after that, I’ve told this story to students all over the country.”

While some students walk away with different answers as to what the moral of the story is, Washington doesn’t give anything away.

“I’ll leave you to decide how you want to live your lives,” she told the group.

“You hear them walk out talking about it and you know that it’s something that’s hopefully going to stay with them,” Barnhardt said. “To me, that’s what it’s about.”