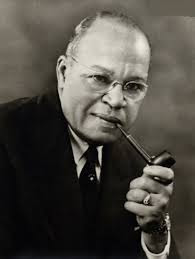 He was an engineer and mathematician.
Born in Ottumwa, Iowa,
He attended the University of Iowa and was the first black football player for the team. They called him Alexander the Great.
The professors in the engineering program tried to dissuade Archie from studying the subject. They told him they’d never heard of a black engineer. They told him he would not be successful.
In 1912 he achieved a BA and became the first black person to graduate from the College of Engineering at the University of Iowa. He was hired as a foreman for an engineering company that built bridges.
In 1917 he opened his own engineering firm. He was 26. A.A, Alexander, Inc. was just the beginning.
He kept his studies in the subject of engineering and mathematics current – even taking courses at the University of London.
He made partnerships with two other engineers, both white, and formed the first interracially owned engineering firm in America.
In 1929, he partnered with an engineer Maurice A. Repass and changed the company’s name from A. A. Alexander Inc, to Alexander & Repass
(I tried to find information about Maurice A Repass, but he has been overshadowed in history, and all the references to him simply refer back to Alexander.)
Alexander stayed with his firm until his death.
In the 46 years he worked for his engineering company, he built a whole bunch of stuff, Here is some of the most recognizable.
The Whitehurst Freeway in Washington DC.
The Tidal Basin Bridge

The job he took most pride in?
The 1.2 million dollar contract to build the heating and cooling system for the University of Iowa.
In his long career, he designed and built bridges, freeways, apartment buildings, tunnels, office buildings, and railroad trestles all over the USA, in Central America, and the Carribean.
Despite his wealth and prominence, he faced the same racial animus that so many other African Americans have had to deal with.
After fighting laws that prevented him from buying the house he wanted in the neighborhood of his choice, he and his wife woke after their first night in their new home to find a cross burning on their lawn.
He understood the nature of the country in which he lived and the importance of not allowing those in power to oppress everyone else. He understood that only by making America a place of boundless opportunity would we be able to succeed as a nation.
He told his engineers: “The individual economy must be constantly expanded, with more opportunities for individual initiative and satisfaction. Therefore, we need to develop responsible leaders capable of exercising sound judgment in the face of unprecedented situations. Citizens must learn to spend their leisure time constructively and make mature personal adjustments to the highly complex and divided world. Barriers to equality of opportunity within the community must be eliminated.”
He spent most of his life working to make things better for people of color, and building important, interesting, necessary, and useful things all over the Americas.
No matter where life took him, he kept his headquarters in Des Moines, Iowa.
He was a life long Republican and helped elect Eisenhower.
Eisenhower appointed him Governor of the United States Virgin Islands in 1954.
He ended up leaving his post in 1958 because of ill health, but he was in trouble because he was under investigation for giving his friends preferential treatment for building contracts.
His works are still with us all over the country. He is a man who should not be forgotten.
-Celebrate Black History
Day 1 – The ABC’s of Black History Month
Day 2 – Archibald Alphonso Alexander
Day 3 – Sarah Boone – Inventor and Domestic Goddess
Day 4 – Charles R. Drew – Blood Man