Ernest E. Just was born in South Carolina. His early life was fraught with difficulties.

When he was four years old, both his father and grandfather died, leaving his mother to raise him and his two siblings alone.

His mother, Mary Matthews Just, took a job teaching at the negro school in the area and spent the summer in the phosphate mines of South Carolina.

While working, she noticed that there was lots of empty land near the mines, and encouraged African Americans to set up homes there. It is believed that the town founded on the land is named for her – Maryville, SC

Ernest was very bright, and his mother sent him to The Colored Normal Industrial Agricultural and Mechanical College of South Carolina. He did well there, but both Mary and Ernest thought that the education for black people in the south was inferior to what he could get in the north.

When he was sixteen, his mother shipped him to New Hampshire where he attended Kimball Union Academy.

He returned home for a visit after his second year to discover his mother had been buried one hour earlier. He returned to New Hampshire and threw himself into his studies, determined to make sure the trust his mother placed in him was not wasted.

He graduated from Kimball in three years instead of four in 1903 and was at the top of the class.

Just got his undergrad degree at Dartmouth College. He was magna cum laude, and he was even considered to give the commencement speech, but the faculty decided it would be a bit too uncomfortable for the parents and guests to find out that the only black student in the graduating class had won almost every single award and honor the college offered.
A Black Scientist In America
Ernest had the same problem every other black scientist had in the early 1900s. No matter how brilliant or capable, most universities had white faculties and white students, and they were not about to hire a black instructor.
He joined the faculty of Howard University.  Howard did not have sufficient labs or equipment to do the types of research Just wanted to undertake.
Shortly after joining Howard, Just met Frank R. Lillie who was in charge of the Zoology department at the University of Chicago and a director of the Marine Biological Laboratory in Woods Hole, MA.
Lillie invited Just to spend the summer at the lab in MA. Ernest took him up on it. In fact, he spent the next twenty summers – with one exception apparently – at the MBL.
In 1916, Just achieved a doctorate from the University of Chicago. By that time, he was already becoming famous for his published papers about cells and how their surfaces reacted with each other. He also wrote about the cell’s place in evolution, egg fertilization, and how embryos formed.
He was considered a genius in the design of experiments…but no other university in America would hire him.
A Black Scientist In Europe
His work with cells was both brilliant and completely ignored for years in America. Europe was a different matter.
In 1929, he conducted experiments at Anton Dohrn in Naples, Italy.
In 1930 he became the first American to ever be invited to the Kaiser Wilhelm Institute.
Between 1929 and 1938, Just visited Europe ten times.
European scientists treated Just like a colleague, and the times he did run into racism abroad, it was usually from Americans traveling in Europe.
Contributions
Ernest Just wrote books, numerous papers, and articles about his observations and experiments on cells. His work is still considered brilliant, and it is the backbone of our modern understanding of cells.
Breeding Habits of the Heteroneteis Form of Nereis Limbata at Woods Hole/Mass by Frank R. Lillie and E. E. Just
“This work has been selected by scholars as being culturally important and is part of the knowledge base of civilization as we know it.” 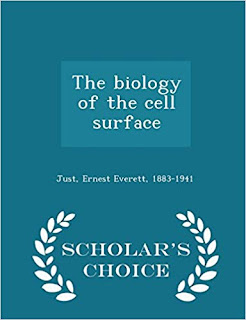 The Biology of the Cell Surface by Ernest Everet Just

When World War II broke out, Just was at the Station Biologique de Roscoff. The French Government told all of the foreigners to leave but Just stayed to complete his research.

In 1940 the Nazis invaded and Just was put in a POW camp. In 1941 the American government negotiated for his release. He’d fallen ill during his imprisonment, and when he returned home he was diagnosed with pancreatic cancer. He died shortly thereafter.

Ernest Everett Just pioneered work on cells in his day, and his work is still informing modern day scientists.

There is lots more to learn about Ernest Everett Just.

In 1911 he co-founded the first black fraternity, Omega Psi Phi.
In 1996 the US postal system gave him his own stamp.

There are lots of really long science words and terms and such that Just studied, but this is a thumbnail, not a dissertation.

Thank you, Ernest Just for all the knowledge you contributed to our modern understanding of cellular functions!